When Norma Ashby heard they were closing Lakeside High School and tearing it down, she was devastated.  She, one of the few alumni left in town was on a mission.  She would save the school.  She decided to have a reunion and convince her old classmates to help her purchase Lakeside High.

This was the high school reunion weekend.  The ‘get re-acquainted’ party the night before was a great success.  In fact so much so that the eight of you and Norma decided to meet at the Lakeside Greasy Spoon before going to the 60’s, 70’s ‘Rock ‘n’ Roll’ costume party.  Norma never made it that night.

Norma had said she would save Lakeside High or die trying.  And, that is exactly what happened.  Norma Ashby was found dead in her home.  She had been shot to death.

Debbie Rowe:  A devoted wife and proud mother.  Driven by her competitive nature.  How far would she go to be number one?

Blake Walker:  He is a soap star.  An ‘idol’ who has it all.  A beautiful wife, wonderful children…what more could he ask for?

Mary-Lou Potts:  A successful businesswoman with a razor sharp mind and a troubled past.  Left Lakeside and vowed never to return.  Was attending the reunion a cover… for murder?

Doug Griffin:  An ex-football player.  Spoiled and reckless, he hates rules and regulations.  Was his next play “unsportsmanlike conduct”?

Veronica Hardy: A psychiatrist and marriage counselor. Haunted by a past she tries to keep secret.  Was she all psyched out?

Wayne Hardy: Veronica’s husband and business partner. He is attractive, friendly, and self-assured.  He and Veronica have it made.  Would he risk it all for revenge?

Wendy LaRose:  A high priced Madam.  She is quick-witted and loose moraled.  Would she do anything, or anyone, to get what she wanted?

Randy Whalen:  Police Officer for Lakeside’s finest.  He has a forceful personality, not to be crossed.  Has crime and violence become a part of his nature? 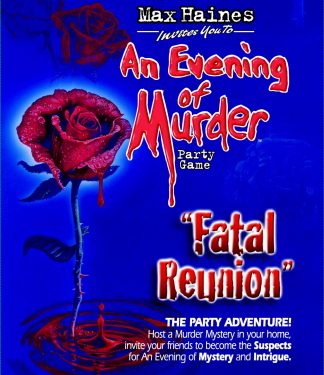