It started out as just another friendly night at Nick’s Cocktail Lounge. The piano man was playing softly over the low din of conversation. But, he wasn’t the only entertainment…there were also the colorful characters at the bar, providing an intriguing atmosphere. They could have kept you entertained, all night long.

But, who would have known, tonight, the main attraction would be – murder!

Chloe Nelson:  The local barfly looking for love in all the wrong places. She believed the perfect man would come her way. Would she find more than she bargained for?

Sean Wells:  He had “political connections”. With his dashing good looks and irrepressible confidence, women could not resist him. Had he met his match?

Amber Welby:  Bestselling author. Her latest book “Get Over It” was about to become a best seller. Were her feminist ways and no nonsense attitude about to change?

Jack Henry:  Bartender and Manager at Nick’s Bar. The best bartender in the city…he had a trophy to prove it. His motto was, “You must combine style, entertainment value, and a willingness to provide extreme service.” How about – murder?

Joy Darby:  Tarot card reader and a regular at Nicks’. People seeking insight and answers to their problems was her specialty. Was murder in the cards?

Dennis Chase:  The Piano Man. Whether singing or tickling the ivories, he gave one heck of a good Billy Joel impression. He played by ear – definition: To deal with a situation as it develops and without a plan…(hmmm).

Mara Landers:  Waitress and Jack’s ex-girlfriend. She had been serving customers at Nick’s Bar for about two years. Had she become bored and unhappy? Did she decide to add murder to the menu?

Alec Blaney:  Master Magician, illusionist and sleight-of-hand artist. He was a man of tricks and a spellbinding performer. What did he have up his sleeve tonight…murder? 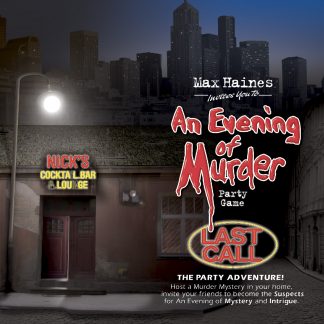